skip to main | skip to sidebar

One of those robotic types called this morning to discuss the extra charges that were added to my latest trip. Luggage: $15 per flight. Failure to book within 21 days: $50. One day we're going to look back and marvel at the way companies in the heat of the recession chose to bite rather than kiss the hand that feeds them.

I saw it yesterday, too when I decided last minute to add more turkey to the order and the deli counter guy had a postal because he had to re-open the envelope and stuff in a few more slices. (Question: Is it oxymoronic for a deli counter guy to go postal or just plain moronic?) Shouldn't I be "yes ma'am"ed since I'm in the store ("Stores Are Begging Consumers to Shop") and not sitting home creating spreadsheets of my husband's expenditures?

Speaking of spreadsheets...ladies take note: Now that business has fallen off the cliff our husbands still deserve a chance to demonstrate their prowess with Excel so be prepared to receive attached documents outlining your daily expenditures. It's one thing to justify six ounces of the most sumptuous white tea from one of NYC's grandest tea salons at the time of purchase (excellent for boosting the metabolism) and another thing to justify the purchase while trying to wiggle into fitted black skirt (clearly, metabolism is still not up to speed).
Posted by Ellen Lubin-Sherman at 12:49 PM No comments:

You would think the management of the ultra-haute gym (for New Jersey, anyway) I frequent would put the absolutely most fabulous people at the front desk. And the owner does...a delightful and people-pleasing Marco who does a superb job. But when I arrived this morning and went through the checklist ("is MSNBC/Morning Joe on a monitor?") one of the gym's physical trainers was standing alongside Marco demonstrating attitude. Excuse me, ATTITUDE. Affecting a look that was a combination of rolled eyes and contempt, the clod nearly got away with it except...I'M NOT GOING TO TAKE IT ANYMORE ("Network").

Have you seen that 1976 classic movie? A deranged network anchor by the name of Howard Beale starts to rant and rave about the media, finally throwing open the window and shouting, well, see above. He was referring to the media's inanity. I am referring to the insolent and obnoxious behavior that somehow got a pass way back a few months ago (pre-Recession) but suddenly doesn't feel right. Today's Times has a story about how the recession has forced sales people to be nice to customers. Quelle horror! On Madison Avenue, no less. Who's going to shop now that humiliation and indifference are verboten? Very troubling.

I started to walk into the gym but stopped in my tracks. I went back to the desk, to the arrogant young man and asked him "What's with you?" Again, the vacant stare. "I don't enjoy starting my day like this. Kindly do not Dead Fish me again." I swear I could hear applause coming from the ladies' locker room.

You would think that the management of this ultra-haute gym (awright, maybe not ultra haute) would talk to his employees about customer service especially in a time of cholera. Gyms are wonderful places but they're not high on a list of consumerables like milk and bread. And with the weather getting warmer, you can get a terrific workout in the park or on a bike. For a lot less money than a gym membership.

I think I'm being way too hopeful when I write "you would think." Clearly no one at this gym, ultra haute or not, is thinking. And that's too bad because once you open the window and starting ranting, it's awfully hard to stop.
Posted by Ellen Lubin-Sherman at 12:00 PM No comments:

Image In A Time Of Cholera

Have you heard the theory "emotional contagion?" We can only be as happy as the people who live or work near us. Evidently, it doesn't matter if your best friend is Pollyana but she lives 1000 miles away...if your next-door neighbor is mood-disordered and perpetually angry, you're more likely to catch his mood.

Luckily for me, the guy who sits in the next office is a cockeyed optimist. And no matter the news cycle, the guy sticks to his work, plans his vacations, takes his wife out to dinner and sports a startling array of smart-looking sweaters that he wears over crisp oxford shirts. Even his shoes are shined to perfection...wonderful.

Over a business lunch a colleague confided that she had caught herself complaining about work and the dearth of opportunities. She was shaken by her dispirited commentary. "What was going on?" she wondered. I mentioned "emotional contagion" and she brightened with relief. "You're right," she said, "I've been talking to too many people. I've got to get back to my work."

I urge my clients to vent and wail but not in public and certainly not in front of anyone with influence. No matter what is going on in your life or in your business, it's important to protect your image. The public's perception of you and your company has been achieved by a series of calculations. You cannot be cavalier about those calculations -- they served you well and will continue to serve you well in the future. But right now the air we're breathing is toxic, filled with anxious and dyspeptic ruminations.

I realize it's hard to escape the Cassandras (especially now) but we can out-smart them. Limit your phone calls or visits. Don't feel obliged to share their doomsday scenarios. And shine your shoes. I'm convinced it's one of those acts that will ward off the plague.
Posted by Ellen Lubin-Sherman at 3:10 PM No comments: 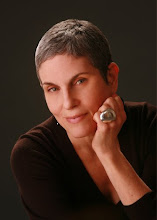 Ellen Lubin-Sherman
Ellen Lubin-Sherman never set out to be the arbiter of professional presence, impeccable style, superb communication skills...it just happened. Today she advises business executives, entrepreneurs and some of the country's most admired companies on how to build relationships that lead to business...or more business.